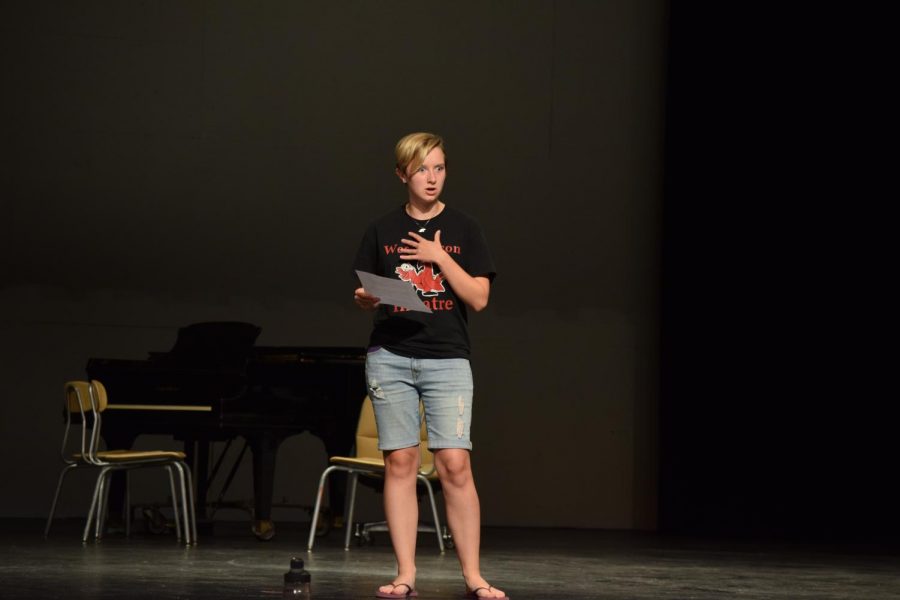 One might know the tale of the forbidden love of Romeo and Juliet, a tale filled with bloodshed, banishment, poison and (spoiler alert) the death of the Veronian lovers themselves. That was a tale spun by the famous author William Shakespeare, a man whose tales are still told today by teachers in classrooms and performers on stage. One couldsay that the tale’s language is outdated, so it might peak the interest of those who wonder what it would be like in today’s language. That peaked interest is exactly what the Falcon Theatre hopes to obtain with their adapted version of Romeo and Juliet.

With the target audience of West’s theatre program being the students, a modern language might grab their attention more than the aged and confusing language of old. Although people might wonder, how does one go about modernizing it?

“Luckily I’ve read a lot of Shakespeare so I can a lot of the writing, which most people don’t get while reading it. [Shakespeare] was actually quite creative with his wordplay throughout his writings and that is something that I take into account with writing the adapted version. Right at the beginning of the play they are talking about drawing their swords, so one of the things I wanted to play on was ‘draw,’ which in a different meaning would be drawing with a pencil or crayon. So I still am trying to keep the wordplay going in the adapted version,” Anderson said.

Hearing this people might still wonder what exactly he wrote in this instance, and Drama Club President and senior Robert Greeve can answer.

“All of the names of the characters and places will be staying the same, but instead of using words like thy and thou, we will be using what you could call slang terms. For example one of the lines in [the play]  is ‘Oh you drawing now? You got a pencil?’. We are using play on words and language better suited for kids and adults who might not understand the way it was written at first. Although we are hoping to appeal to the younger audience more so,” Greeve said.

This gives those curious souls a simple glance at the more modern version of Romeo and Juliet and a preview of the play itself. Overall the members of Drama Club are looking forward to this modernized tale.

“With Anderson writing [the play] and making it modernized, I think it will be a lot more interesting to watch. I think that once we have it completely organized, it will be a lot of fun for the cast and the audience alike. I am so excited to see what people will think of it, because I know it will positive,” Drama Club Historian Cailin Prunchak exclaimed.

Duet ’til the end 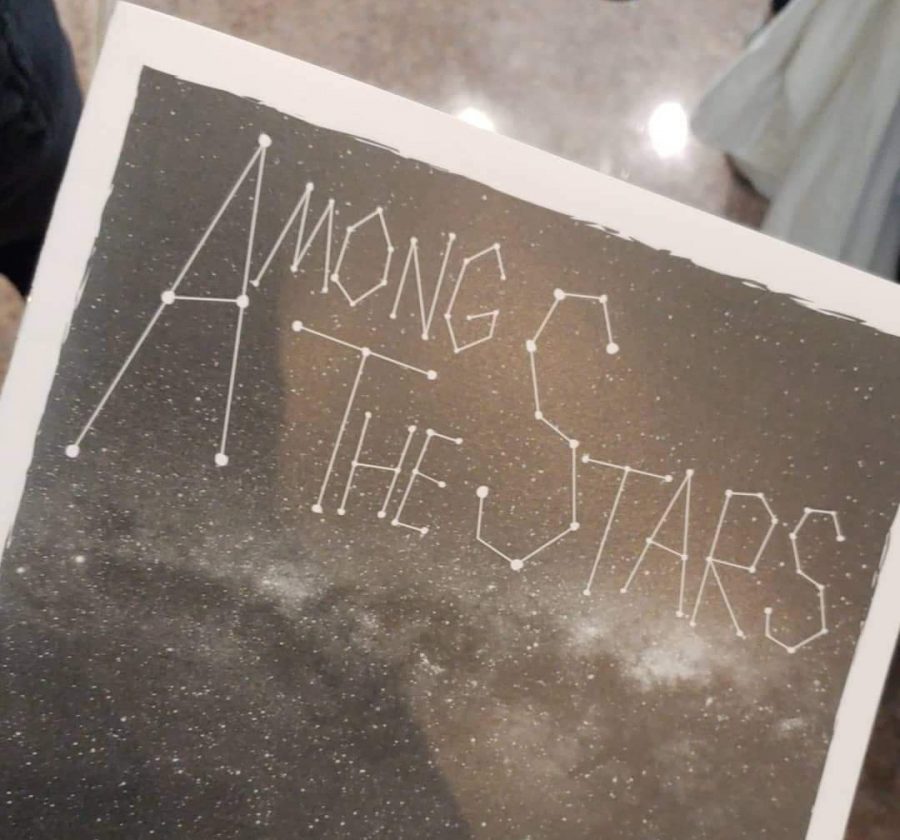 Published with permission from Americus Geest

On Nov. 9, 24 students attended the Iowan Thespian Festival, and two seniors, Lily Hancock and Xavier Thomas, placed second place in duet acting. This is the first time in years that West has placed at the festival.

On Nov. 9, 24 students from West’s drama department departed from the campus in the early hours of the morning for the three-hour drive to reach the UNI campus. This campus is home to the Iowa Thespian Festival.

This festival is an annual event where drama troupes from all around the state of Iowa come to watch performances from other schools, audition for scholarships, attend workshops, and compete in individual events.

The event of duet acting is where two attendees from West High achieved second place. This was the first time in four years that West has placed in an event at the festival.

“Since I have came to high school I have never seen someone place from West, so it was really cool to get second place because Xavier and I have entered ourselves in the duet acting event all four years now, and we have done a scene together every year,” senior Lily Hancock said. “We finally did place and I was just ecstatic because it couldn’t have been more perfect.”

Essentially, the duo of seniors Lily Hancock and Xavier Thomas made history during their high school careers. Being the first West thespians to place in any individual event in four comes with quite the emotional high.

“I was like ‘FINALLY!’ All the years of trying to at least get someone from West on that list was the goal. I would do anything to at least place,” Thomas said. “ I was so happy, I felt completed and with Lily being my acting partner it only made the accomplishment even greater.”

Hancock and Thomas have been acting partners for all four years and have grown throughout their time together both as friends and actors. iJAG specialist Cynthia Safford has served as an aid for the students throughout their time here at West, and has imbued them with her knowledge, and love of theatre.

“The biggest thing I do is to remind them that should be fun, so when we talk about characters and relationships, I have them do this exercise where we push everything to a level where they just feel silly and that causes them to feel very comfortable with each other,” Safford said. “If you just push yourself really far, then they experience teamwork and learn about emotions and all of that fun stuff.”

Through Safford’s aid and their growth as friends and actors, Hancock and Thomas have made their mark on West theatre history. But the main questions is what exactly has changed from last year to this year which allowed them to place so high?

“I think our vibe was different. We definitely had a stronger bond this year. I know we have gone every year, but this year we took the balcony scene from our “Romeo and Juliet” play. We had been working on it for months already, and so I think that the preparation was a huge boost because we had a lot more time to prepare and practice,” Hancock said. “Also just being in the play together this year brought us closer. So I believe that the scene came more naturally to us this year than the scenes we’ve done in the past.”

“In the past we really didn’t use our acting abilities. The monologues and stuff we performed we believed were good, but they didn’t hit as hard as we wanted to,” Thomas said. “Anderson’s script shows a lot of emotion along with comedy, which made it work really well for us.”

Thomas and Hancock have spent the last four years as acting partners, and Safford has especially enjoyed watching them blossom into who they are now.

“They share the same sense of humor and relaxation with each other. They seem to be friends, which helps them feel comfortable together on stage, so I think one of the biggest things is that since they haven’t been successful these past years they’ve been able to hold each other up, and hold each other accountable in order to work through things,” Safford said. 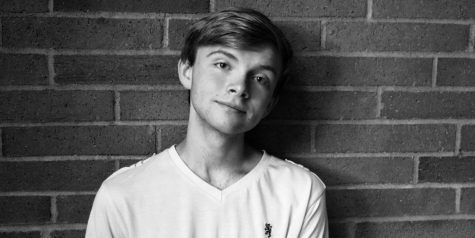 Nine times out of ten, you can find Beak ‘n’ Eye Managing Editor Zack Misner with his nose in a book. His love of reading and writing makes him a perfect... 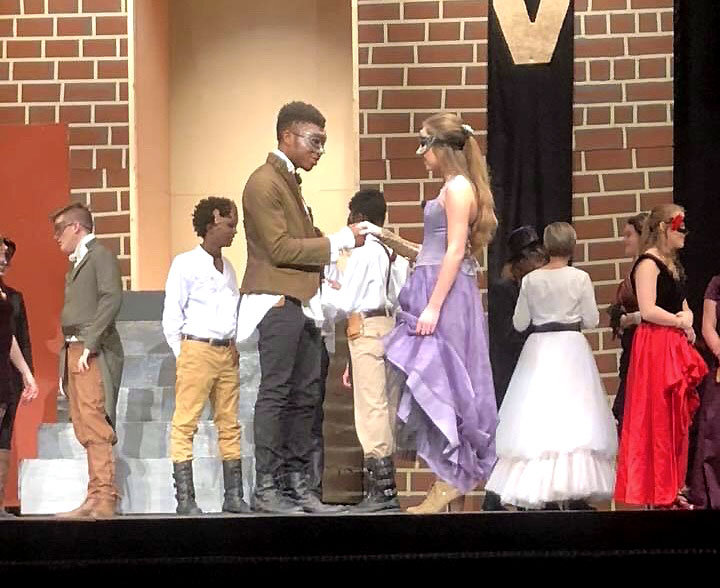 Romeo and Juliet played by Xavier Thomas and Lily Hancock exchange kind looks of endearment when they first encounter each other at the gala. Little do they know this is where the story spark begins.

Brought to you by the Falcon nest’s very own Liddy auditorium, this year’s 2018 play is… drumroll please …Romeo and Juliet! This performance was shown from November 2-4. Director Nic Anderson wrote his very own script while also adding a few parts from the original Shakespearean writing.

Most of us know the story of the girl and boy who fall madly in love within a matter of minutes at the expense of betraying their families’ wishes. The story didn’t change in this rendition of the play, but Anderson tried to add a modern twist in the writing and portrayal of the show, which helped explain the story in simpler terms for the kids and audience members.

Juliet, who was played by senior Lily Hancock, had the role of the innocent and smitten daughter from the Capulet family. Her partner was introduced as senior Xavier Thomas playing Romeo, the son of the Capulet family’s mortal enemy, and a contender in the Montague family. Both Thomas and Hancock mastered the art of acting with true passion and attraction, which made the show all the more interesting to view.

What was particularly impressive was the acting of the relationship between Juliet and her nurse, played by senior Olivia Wilber. In the original Shakespeare piece, it is to be said that the nurse is like a true mother to Juliet, while Lady Capulet, portrayed by junior Chris Call is the cold, not around much mother. Both Wilber and Call had much enthusiasm for their parts, and lived up to my expectations.

As the scenes continued and the story kept progressing, we met the character Friar Laurence, played by senior Robbie Greve, who had what I would say the most vital role in the story. The Friar had the most influence on the characters with creating the fake death poison, and going behind both of the families’ morals, along with lying to everyone involved, aside from Juliet of course. Greve did an impeccable job at adding a sarcastic and ironic tone to the sad tale, which definitely got many giggles from the crowd.

Although the performance did take a modern tole on the ancient storyline, it did seem more modern at the beginning, while fading back into the old English writing format toward the end. Aside from the small script word changes at unusual scenes, the acting and overall performance blew the audience away, without a doubt.

Every senior had a different story to tell, many of which involved forming the most important bonds all from their theater lives. Seeing the play and the interaction between characters and the actors themselves at the finale, I can officially say that acting has a new light around it for me and many others in the audience. The performance brought an individual twist on the plot, but did a great job at maintaining what mattered in the writing, true love.

The Print Editor of the Beak ‘n’ Eye is someone who stands on her own. Kelly Snawerdt is 17 years old and is keeping her position on staff as Print...