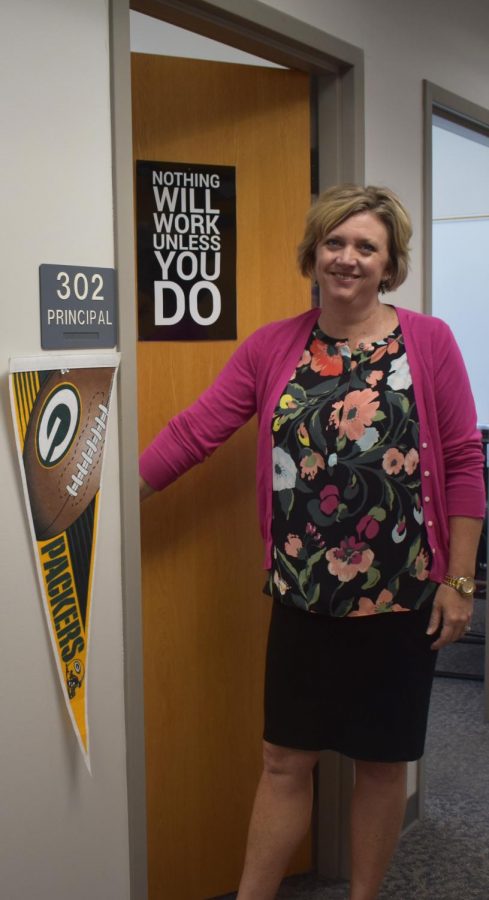 Williams decorated her door with a poster and a Packers flag to show her personality.

Imagine sitting at home recovering from surgery and getting a text from the Associate Superintendent Rob Scott. Williams was in this exact position when she was offered her dream job of head principal at West High after previous principal Jenni Weipert was offered a special education position in the district.

“I was so excited to come back to West, and I told them (her bosses) I am not going to tell you no, but I am kind of sad to leave Truman. I love my teachers and kids over there,” Williams said.

Williams was a principal at Rocky for five years, Williams for two years, Mid City for one year, North for one year and Truman for two years. A few years ago Williams would not have been up for the job, but said after running Truman without an associate principal and having no experience at Rocky when she started, has prepared her for this position.

“I would drive home crying (from Rocky) talking to my mom in Texas and my husband thinking, ‘what have I gotten myself into?’. But you know that old saying, what doesn’t kill you makes you stronger? I got through Rocky by looking at how kids and teachers were affected by decisions,” Williams said.

Williams believes her personality and good sense of humor will help her do great at her job. No matter who it is in the building, she plans to treat everyone with respect.

“What drives me is that I think for every decision I make [she asks herself], ‘Is this good enough for my kids in this school’,” Williams said.

“Some stuff is not going to be a big deal, but some will be a really big deal, like school safety and security. That is a huge deal,” Williams said.

Associate Principal Charlie Driscoll would like to see improvements like less suspensions, and an increase in graduation and passing rates. But he is also in charge of safety and security.

“My specific charge is to make sure everyone in the school is safe and to let the community know that West is a high-achieving safe school,” Driscoll said.

The administration plans to have active, committed drills and class meetings. On the first Friday, seniors will all gather to talk about helping them keep rules in order and a safe school. Important topics covered were, attendance policies, meeting the new administration, and homecoming week and court.

“It is really important that you guys [students] are helping us out. If you are propping doors open for a friend, yeah 99 percent of the time that kid is going to come in and no big deal, but what if. You just need that one time. It is not going to be the kids sitting in class with their backpack. It will be the kid that used to go here that sees the door open and comes in,” Williams said.

Williams stated that she will not tell a teacher what rules to have in their own classrooms. Backpacks, food, drinks, etc. are all allowed as long as the teacher allows it, and students are being respectful with those items. It can be a distraction in class to worry about it, she said.

“We are going to take that away because teachers need to teach you guys [students], get you ready for Iowa Assessments. A kid could sneak weed or booze in, but they’re going to do that anyway. We have to look at the greater good,” Williams said.

Falcon Flex has been altered from last school year. Students will go to advisory on Mondays after lunch, before fourth block and schedule themselves for Falcon Flex sessions on Tuesday, Thursday and Friday.

Advisory teachers will show students what is available for the week. Students will then be able to choose their own courses during this time, as long as they are are passing classes.

“I think it [Falcon Flex] will be more beneficial if the kids are choosing what they need help with,” secretary Lisa Rostenbach said.

If a student is not passing a class, the teacher is able to request that student to come to their Falcon Flex for one, two, or three of the Falcon Flex days to help build those skills.

Williams would like to get more and more students into the honors and AP courses. She believes every student should be exposed to high level classes.

“But here’s the reality: our enrollment is not very high right now so we can only deal with butts and seats. If we don’t have enough students, it doesn’t matter whether it’s an AP class or a regular class [we can not run a class without enough students for the class],” Williams said.

The students and staff need to take the responsibility to make West High a place where people want to come to, not only for the robotics and the Certified Nursing Assistant programs, but to have enough success in all clubs, sports, and activities to bring more kids in, she said.

Williams believes that the tardy policy is a work in progress. It will never be completely solved, but she does plan to regulate it and give consequences. Although, there are natural consequences with being late.

“That’s the beauty of high school. It is up to you. If you continue to fail everything, then fine. You’re going to be a 19-year-old at Mid City and not graduating with your class,” Williams said.

Other than natural consequences, sports games will most likely not be off limits to a student that is tardy often because Williams wants to make the money from attendance to sports games, and it is hard to regulate. Dances may be regulated by tardies, but has not been sorted out yet.