Tryouts in a Pandemic 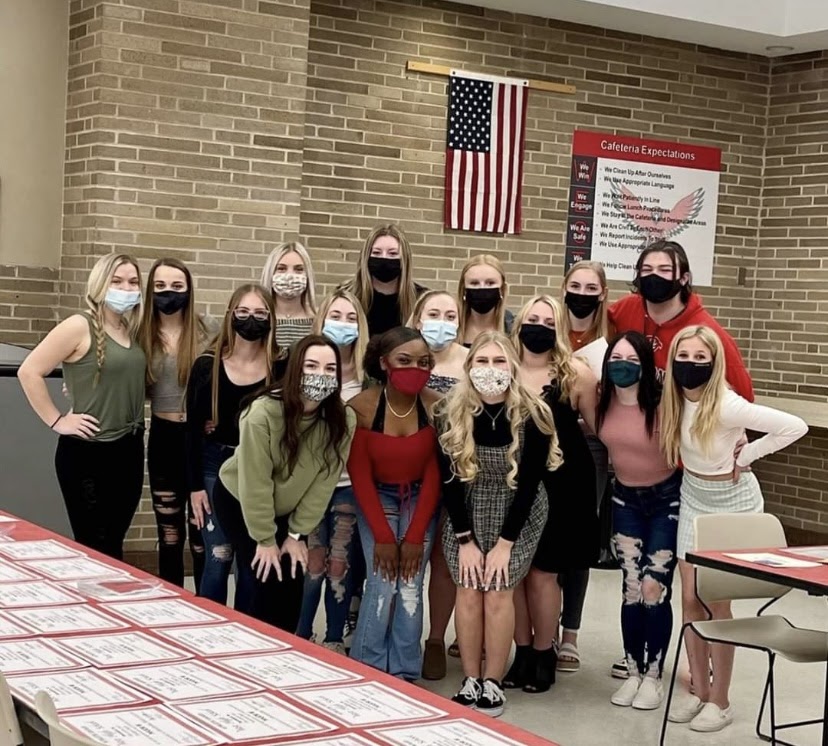 Davenport West Varsity Cheerleaders pose for the last picture of the 2020 season.

You see them at football games. You see them up in the air, doing stunts with excited faces. Who might these people be you may ask? The Davenport West cheerleaders!

On March 7th, West held their 2021 Football season tryouts. These tryouts took place in the Davenport West gym, where they worked on cheers, dances, jumps, tumbling, stunts, kicks, and push-ups. All of these elements were key to having a solid tryout and being part of the team.

“This year we had to do push-ups and splits, which usually we don’t have to do,” junior Emma Peters said.

Although Covid brought many issues, the cheer team was still able to work through these circumstances, while still having a fun time.

“It [COVID] didn’t really affect it that much, because we still had a student section for football, but basketball affected it because there was no student section. So we were only cheering for the parents.”

Even with all these troubles, people were still eager to try out. Davenport West had nine new people tryout.

“This was my first in-person tryout, because I didn’t make last in-person tryouts. And obviously football season because they were virtual. So it was very different for me from what I was used to for virtual tryouts. But it didn’t feel too hard or too stressful on me at least. It was stressful overall but I felt confident going in, it felt great,” freshman Makenna Burt said.

Even though there were still Covid restrictions, everyone had to wear masks, they had to stand arm length apart. Davenport West cheer had more people tryout this year than last season.

“This year we had to wear masks, and the last two tryouts we had were videos so I’ve never done in person tryouts since my sophomore and freshman year so it’s been a while,” junior Bailey Emery said.

Besides the fact they couldn’t actually try out like normal, the athletes still found some fun in the situation.

“My favorite part is probably meeting new people, getting to hangout with everyone and having the chance to get to know everyone better,” continued Emery.

One of the new team members, Nasir Kolwey, wanted a new experience for his senior year.

Although Cheerleading has been considered a female sport, competition cheerleading has grown in popularity among male athletes, as it requires strength, coordination, and a strong dance background. When asked if he would encourage more guys to participate, Kolwey responded, “Yeah for sure, I feel that guys should go out of their comfort zones.”

Someone who knows the importance of male cheerleaders in competition cheer, is head coach Heather Kormann. She has coached West Cheer for five years, and has also coached at Bettendorf High School and Middle School.

“The expectations are not only to be good at the skills, but to show you are dedicated. We want to see facials, tight arms, enthusiasm, voice projection, and knowledge,” said Kormann.

Through four days of clinics and four hours of tryouts, the hard work of these athletes paid off. Whether they’ve made the Competition Team, Varsity or Junior Varsity, the cheerleaders are all satisfied with their accomplishments.