The day that keeps on going 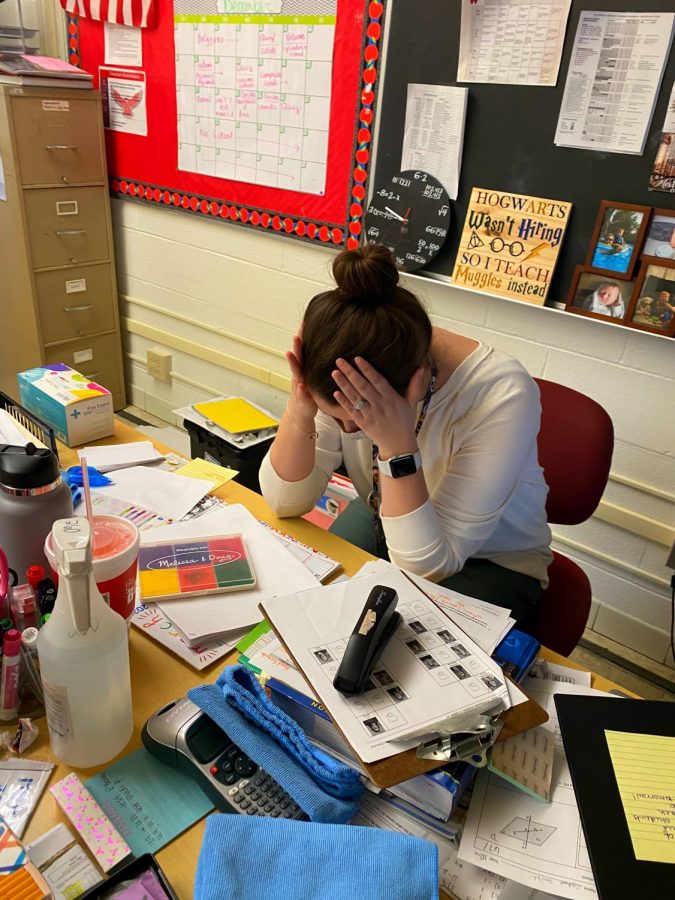 Aleksiejzyk observed that Klimek often came across as overwhelmed, especially when it came to her desk area. Although this isn’t what it typically looks like, the full schedule has impacted not only the teachers, but the environment around them.

The day is coming to an end; students are driving away ready for a long nap, janitors are starting to make their rounds, the hallways are filled with an empty silence, the lights begin to go off…but wait! Why are there still teachers here?! As of the 2020-2021 school year, the Davenport School District has made the decision to keep the four block scheduling, however, it is not without sacrifice from staff.

According to Davenport West’s Associate Principal, Mike Orfitelli, more than a year ago the school board made a decision for a cost-saving measure that high schools would move from four block scheduling, to the “traditional” schedule, which transitioned to seven or eight period days. It was never decided if teachers would be teaching five out of seven, or if they would teach six out of seven, but the more classes that teachers teach during the day, means fewer teachers that are needed. However, there was a proposal made to  keep the block schedule, instead of teachers teaching what we would consider 12 blocks the entire year, one of the four terms, they would teach a thirteenth.

“All the teachers will have at least one term of the overload, and we have a big schedule coded with yellow dots so we know who has been assigned the extra block. I have probably about only two teachers out there who are still waiting for an assignment, and that assignment may end up being towards the end of the year of seniors who may need to recover a credit,” Orfitelli said.

There are a number of issues that come with this new scheduling approach, like teaching without a prep block. However, some teachers also fight the battle of having the same exact class for all four blocks. Without a variety of levels to switch it up, this can become quite draining.

“There are some teachers who are teaching the same class all day long, like Algebra 2, and it’s exhausting, I get it, but it’s the compromise decided by the district and the teachers’ group. Depending on where their lunch falls, teachers are teaching six hours straight, which is no doubt challenging.”

As someone who has already served her overload, Mathematics teacher Lauren Klimek found that the most challenging battles to fight were against herself, as she tested her limits through a stressful full term.

“The hardest part about having no prep for me was staying organized, and just being ready for the day. This was really difficult because that’s what your prep is for, and without that it is a whole other challenge,” Klimek said.

Klimek explained how on a typical day she would have to come in extra early, or stay later than planned to prepare for the day to come. Whether it was staying to make copies, or put in grades, time was a hefty battle as she found herself often grading on her own time at home. With the extra hours being spent, Klimek hoped it was enough where it did not impact her students.

“I hope my students were not affected by this, but I think that they could see that sometimes I was a little more disorganized than I normally am, but I hope it didn’t impact my teaching.”

Orfitelli shared that the only negative he would look at from a student with any teacher experiencing this is that the teacher’s tired, and when a teacher is tired or just exhausted, those students may not be getting truly what the teacher’s best is.

Although the full schedule isn’t ideal, according to Klimek, there were still some highlights that she could recognize about the term she experienced this in.

“I’m glad that the term I had my no prep was where it was, it was term two so I was with kids that I was familiar with, and I didn’t have a whole new group of kids four blocks out of the day. I am also glad that I had it before 5th block was a part of the schedule because then I didn’t have that extra half an hour that I would also have to prepare for. The time that I had it was good, but I am more than relieved that it is over.”
“Now that I have my prep back I feel more relaxed, I’m not as stressed, and I’m able to get stuff done through the school day that I normally would. Just having that time back to mentally prepare is so helpful,”  said Klimek.
With teachers racing against the clock to accomplish what needs to be done, along with hiding the tension, students were able to look past these actions, moving along as they regularly would. However, some chunks of these circumstances were more challenging than others, especially coming from an observable student’s point of view.

“I had Mrs. Klimek for Precalculus first and second term. It was really challenging as a student because we weren’t able to come in during a specific block to make up quizzes or get extra help, which is what I would typically do when the teacher has their prep. This really went for any teacher, finding a time throughout the day for any class was challenging. However, there wasn’t anything anyone could do about it, so I just made sure to communicate with her on when to come in,” junior Brianna Aleksiejczyk said.

From Aleksiejczyk’s view, the stress seemed to emerge from one another, as the teacher and student would feed off of each other’s actions. However, it didn’t seem to affect the student as much as it did the teacher.

“I could just see how stressed Mrs. Klimek was. She seemed to be scrambling to get things done, but we weren’t concerned because we knew she would get everything accomplished. I just felt bad because it was more that she stressed herself out, rather than the students.”

A pro that can be found according to Orfitelli is that if the teacher doesn’t have the responsibility, per se, to teach a regular content class, and their responsibility ends up being a support/recovery type class, then it’s actually a great opportunity. It’s still a teaching assignment during the day, but it’s also an additional opportunity that’s structured and scheduled for students to get into.

“As it stands right now, this full schedule will move over to next year as well because of staffing and cost saving measures. The biggest chunk out of school district budgets is people’s cost. It’s not books, it’s not technology, it’s the people,” Orfitelli said.

Although the future may not look much different for these teachers scheduling wise, this year has been full of trial and error, along with lessons learned to prepare the faculty for the following years.

“I’ve learned through this experience to be more flexible, to know that you can have it planned all you want, but it may not go the way you were intending it to go. I think that from this I’ve hopefully learned how to be a better teacher overall,” Klimek said.