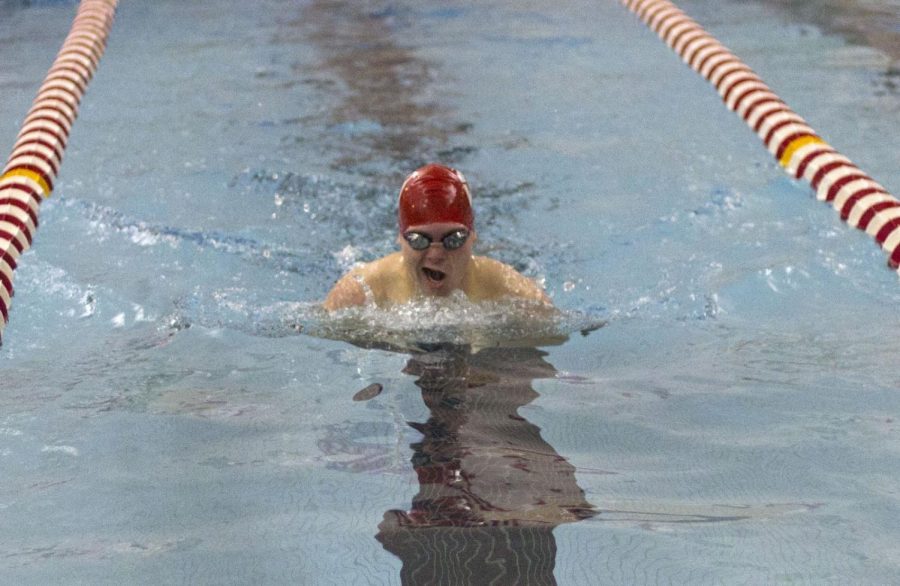 Talk about a game face. Boys swimmer Nate Hagedorn '23 uses the breaststroke technique during a home swim meet vs. Muscatine. Hagedorn swam multiple races at the swim meet versus Muscatine. "I like that [breaststroke] is more challenging than freestyle. It gives me more to do and it's a fun stroke," Hagedorn said.

When you think of swimming with a mask, the first thought that comes to mind may be a scuba diver, wearing all of his scuba gear, swimming deep into the ocean, and looking for hidden treasure. After all, water and face masks tend not to mix well. For the West High swim team however, wearing a regular face mask before diving in and after jumping out of the water is the new normal.

Mary Mandel, boys swim coach, has been on the coaching staff for four years. During her second year of teaching at West, Coach Mandel knew she wanted to be involved with the swim team because of her past in swimming and decided to take a position on the coaching staff when she heard there was an opening. Mandel’s past experience with swimming influenced her decisions to take the job.

“I started swimming when I was 6 and swam all through college,” Mandel said. “I’m not sure what the initial push was for me and getting into swimming, I just remember I really enjoyed going to see my older cousins at their swim meets, so my dad signed me up.”

Although Coach Mandel has an extensive past in swimming, there’s nothing that could’ve prepared her for this year. With COVID-19 threatening the safety of everyone, the swim season was up in the air. However, the swim season was able to take place as long as strict guidelines were followed.

“We do daily temperature checks, separate equipment bags, masks are worn on deck and in the weight room, if you share a lane with a teammate you start the work out at different ends of the pool, there are no after meet dinners and many of our parents have been unable to attend meets,” Mandel said. “Despite all of these changes, I am just glad that the boys have been able to still compete and have a season; many schools were not as lucky.”

The season has been cut immensely and meets have been cancelled; but for senior Dominic DeLaPaz, a shorter season is better than no season. DeLaPaz has been on the swim team since freshman year and was excited for his final season.

“At first when they told us that we were going all online for a couple weeks, I started to worry about the season, whether we’d have it or not,” DeLaPaz said. “Having this season helped me a lot physically and mentally because it’s important to get that mindset of swimming since it’s a tough sport.”

While DeLaPaz was thrilled to be able to swim his final year, there are inconveniences that occur with the safety guidelines. A new rule was put in place that states fans are only able to attend the meet if they are given one of the two tickets provided to each swimmer. Masks are also required in the stands.

“I like to have the supporters there. It helps encourage me to get ready for a race because I know they are there and they are watching me so I try to do my best for them,” senior DeLaPaz said. “Not having that motivation when they are not there makes me struggle a little bit when I’m trying to do better in the race.”

Although the swim meets may not be the same without open admission, some fans are better than no fans. The lower attendance allows fans to space out more in the stands. Bobby Wright, father of senior swimmer Harrison Wright, believes there are pros and cons with the two ticket per athlete rule.

“The more exposure you get, the stronger the chance you can spread it to multiple people; but on the other side of that, we’ve been going through this since March so people know the rules and standards,” Wright said. “At the end of the day, if you respect people’s space and do what’s right, I think you could do four tickets [per athlete].”

Despite the fact that the stands are not full, the boys swim team is still competing. Although the season may be condensed, the boys swim team has already won one swim meet this year. While winning is very important to the swim team, it is not coach Mandel’s favorite part about coaching.

“[My favorite part about coaching is] seeing the progress the kids make. I have such a wide range of swimming abilities on the team, and it’s really fun to work with all of the different levels and see their progression,” Mandel said. “My favorite meets are at the end of the year when we taper and all of their hard work pays off.”