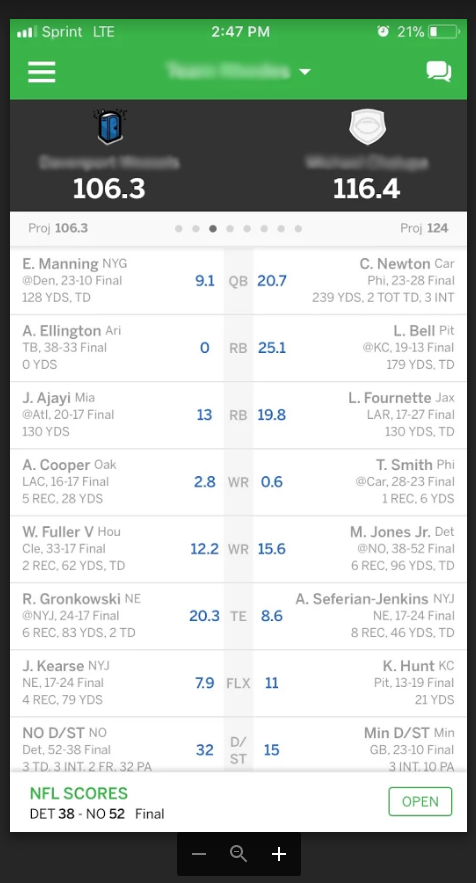 The line up for NFL week six.

During fantasy football, players need a league manager. This manager is in charge of finding people to play and setting up the specific rules within their own league. Senior Keenan Dolan has started his own league.

To join a league, players must get together and decide who will be the league manager (the person in the league who makes the rules), then decide what platform they will start a league on, pay money (if it is a league with betting) and then players will enter a draft. There are many platforms to start a league. CBS, Fox and ESPN offer their own unique fantasy football experience.

“Don’t take a quarterback, take a running back,” Dolan said about the first round of the draft.

The players earn points based off how good their game was, every yard for a receiver and tailback equates to 0.1 points. When a player scores a touchdown, they receive six additional points. These points will add up and then at the end of the week when all players have played and all opponents players have played, the points are compared and that decides who wins.

“(Fantasy football) is like if the NFL has a total restart and each team only had to draft skill players,” junior Jack Reis said.

The fantasy season lasts all football season, and throughout the playoffs in January through February. Depending on the league settings, a team can drop and add players at any time in the season. This helps when one of your players has been injured and you need a replacement.

Any team can attempt to make a trade within the season too. How a trade works is that a player sees what players they want from another team, then selects what they  need then decide what they are willing to give up to make the trade complete. After this, the other player will receive a notification, and they will decide if they like the trade or not.

“It makes the game a whole lot more fun to watch,” family consumer science teacher Brian David said. “ (I) mostly play with my friends or buddies from either high school or college”.

Anything that happens in real life affects fantasy football as well. If a player gets injured, then the player is useless and not earn points.  There are always going to be undrafted players who can be selected to be on a player’s team at any time to fill the role of an injury.

“My advice would be to have fun and not worry too much for your record. Just play one game at a time” senior Grant Becerra said.
The purpose of fantasy football is to enjoy it and get a whole different perspective on the NFL. Instead of rooting for a team, it is rooting for specific players to earn points and move on in the fantasy season.