Time for the lowest demographic to step up 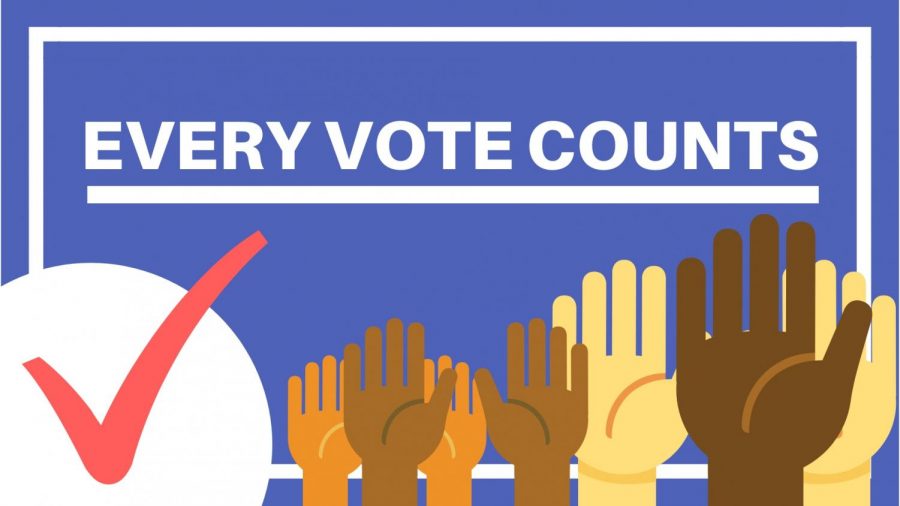 Graphic by Zak Keel from Canva.com.

Young adults in this country should realize that it's a civic duty to do everything that they can in order to make the country the best place possible for all types of people. In order to do this, everyone needs to elect officials that represent the change they want to see in the nation. Youth may only comprise 25 percent of the nation’s population, but they are 100 percent of the future.

Polls will open up today, Nov. 6, for the 2018 midterm elections as Americans across the nation will partake in state and local races that will soon influence the second half of President Donald Trump’s four-year term. There are 435 seats in the U.S. House that are up for re-election, 35 Senate seats are in play, as well as 36 governorships to be determined.

This political realignment has the potential to reconstruct U.S. politics for a generation. Thus, it is imperative to take note of a recurring trend over the decades that continues to influence the nation’s prospect. Young adults have continually been one of the lowest demographics to turn out at the polls when the policies that they are standing idly by will affect their lives. Older Americans are voting at higher rates than younger Americans, which is contributing to a negative correlation between age and voter turnout.

According to a study conducted by the United States Census Bureau on the 2016 presidential election, this notion represents full accountability. Citizens 65 years and older reported a higher turnout of 70.9 percent compared to that of reported voting rates of citizens ages 45 to 64 at 66.6 percent, ages 30 to 44 at 58.7 percent, and that of 18 to 29-year-olds at just 46.1 percent. As a citizen’s age decreases, there is also an exponential decrease in voting turnout for holistic representation.

Over the past decade there have been numerous social campaigns promoting young adults to vote, and yet they still lack civic determinations. So why do so few young people vote?

Speech teacher Maggie Rietz addresses the lack of general awareness of young persons and emphasizes the importance of youth contribution to voting.

“Young people often don’t realize how much the government takes part in their everyday lives. Whether taxes or college tuition, there are many of these things that are part of their lives,” Rietz said. “They should pay attention to what is going on because things that are happening now are going to impact them in some way in the future.”

Young people are a part of the only age group where the results of this midterm election are going to affect them in 50 or more years. Young voters account for around half of the voting population in the U.S., making them a highly influential political force.

“If they are aware of all of the things that might be impacting their lives by someone voting on an issue, then they might realize how important it is to actually elect the people that are in-tune with their values and select those people out that are not,” Rietz said.

Senior Cody Neeper-Burris has been involved with politics in some way, shape, or form all of her life. Even though she has been under the legal age of voting, she has found ways to stay engaged in the political movement. Neeper-Burris strongly encourages young persons to learn more about their democracy and what they can do to improve it.

“As young people, we need to become involved in politics earlier. We must comprehend how the systems work, how they are rigged for certain people, and how we can fight against that,” Neeper-Burris said.

Citizens are living in a time where it is easier than ever to become an educated voter. There are endless ways in which people can stay in-tune with current events, news and politics. The factors in the country, states, and cities should be considered to a higher degree of comprehension in order for people to vote in a manner which best reflects the interests of young people.

“We are known as a generation that is most connected to technology and social media. We have no reason to be uninformed when we have the entire internet at our fingertips,” Neeper-Burris said. “If you have access to the internet, you have the accessibility to be informed. If you say ‘I don’t know enough to vote’, you have already made the conscious decision to not be informed about your country. This is unacceptable.”

If people don’t vote, other people will. And it is inevitable based upon years of prior correspondence that older voters will turn up time after time again. If young people do not vote, decisions about the life that they are going to live, the community they call home, and the future that affects everyone will consistently be made by a predecessor generation that generally lacks intuition with the needs of young people. They are handing it over to someone else. When everyone votes, everyone benefits.

“Everyone should vote. It’s our civic duty, our responsibility. As young people, we are the future of this country. And when we vote, we show our country what we want,” Hensley said.

The collective youth vote can actually sway elections, as per example in the 2012 election of Barack Obama for a second term as president. Obama won 67 percent of the national youth vote in multiple crucial states, which gave him leverage over his opponent Mitt Romney.

Although young people may not be directly affected by all forms of government intervention in their lives at this point, as they age, they will be affected more immensely by policies implemented by elected officials. Everyone needs to think about the future. Everyone should strive to not take voting for granted, but instead use the tool to facilitate the changes they want to see in the country.

“We were given the right to vote over the years. Originally it was only for white men, and it took people a lot of standing up for each other to be able to give black men the right to vote, as well as women the right to vote. If we are not participating, then these people have essentially worked for nothing,” Rietz said. “We need to make sure that we follow through with what they wanted and continue to give a voice to everyone.”

Even if someone is not of age to vote, there are many things that could be done to assist voter turnout and individual awareness.

“As students, they can still stand up and be heard. They can go to legislative forums and speak. They can help make phone calls [campaign]. They can research issues beforehand because soon they will be able to vote,” Rietz said.

The process of voting is easy. At 17-½, a young person can pre-register to vote in the state of Iowa, which will automatically be implemented once he/she turns 18. People can obtain a state of Iowa official voter registration form and turn it into the county auditor or the Iowa DMV office. Online registration makes things very easy. Iowa voters can also take advantage of early voting. If a citizen does not know his/her polling place, he/she can easily search it online by entering his/her zip code. Voters need to make sure to bring an updated form of identification to the poll.