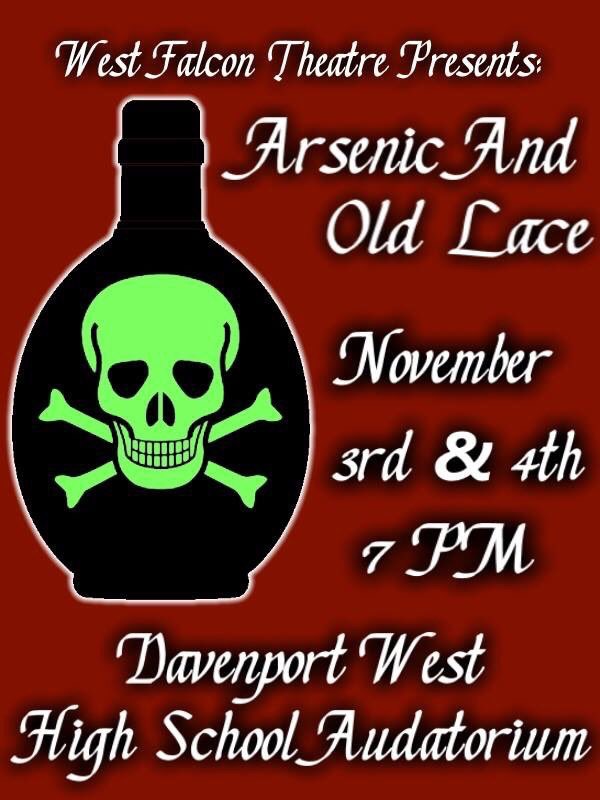 West Falcon Theatre presented “Arsenic and Old Lace” on Nov. 3 and 4 in the Liddy Auditorium at West High School. This was director Nic Anderson’s first time directing a play at West. Anderson and the cast most certainly hit it out of the ballpark.

“Arsenic and Old Lace” is about Mortimer Brewster (junior Xavier Thomas) who falls for the girl that lives next door, Elaine Harper (senior Molly Kretschmer). The two are working towards getting engaged, but Brewster keeps breaking it off.

The couple eventually come back to their family homes to deliver the news of their engagement. While Elaine goes to her mom’s house, Brewster goes to his aunt Martha’s and Abby’s house to tell them the news, only to find out that there is a corpse in the window seat.

In the house he is also visiting one of his brothers, Teddy Brewster (junior, Ben Gabriel), who thinks and acts like Teddy Roosevelt. While that is all going on, another one of Mortimer’s brothers comes home, a homicidal one, Johnathan (Alexander Hamilton), who brings along his business partner Dr. Einstein (junior Robbie Greve).

As secrets unravel, Mortimer realizes that his family is a lot crazier than he thought.

The acting in the play was absolutely wonderful. Each character portrayed their character right to the point whether it was their costume, makeup, actions or even accents.

From the audience’s perspective, you could tell that each cast member transformed into their character which only made the acting better. If a character made a mistake,it was not noticeable.

The audience was roaring with laughter whether it was Mortimer yelling or Teddy blowing his trumpet or running up the stairs yelling the word “CHARGE” several times. One critique would be volume and pronunciation. There were some characters that you could not quite hear nor understand.

The set in a few words was a typical grandma’s house judging from the old furniture, the weird paintings on the wall like a vase of flowers or two random women, the neat dining room, and even the old cabinet that really gave off that grandma’s house vibe. All the props and decorations that were apart of the set tied the scenes together. Oddly enough, each prop was used, especially when it came to the walls where characters would lean against it.

Many of the cast members and even their parents helped contribute to building the set. The costumes and makeup definitely reflected on the character correctly. An example is the aunts (Lily Hancock and Rebecca Casad) and how they had wrinkles and dressed in long skirts. The lighting and sounds were perfect timing with each cue making it easier to follow along.

The play will having you laughing one moment, questioning the next, and even saying, “awwwww” from a cute, little romance part. What had the crowd laughing the most was when Dr. Einstein “jumped” through the window sill, which failed instantly. That resulted in Jonathan yelling at Einstein telling him to go all around the house with Einstein talking smack about Jonathan.

Mostly, it will have you laughing until tears well up in your eyes. Each cast member added a piece of themselves into their character.

Greve is a very over dramatic person and his character. Dr. Einstein definitely portrayed that. For only having six to seven weeks to put this production on, it took a special group of people to make such a funny and enjoyable play.

Watching this made me realize that it is always a good day to be a Falcon.