Get yourself together, President Trump 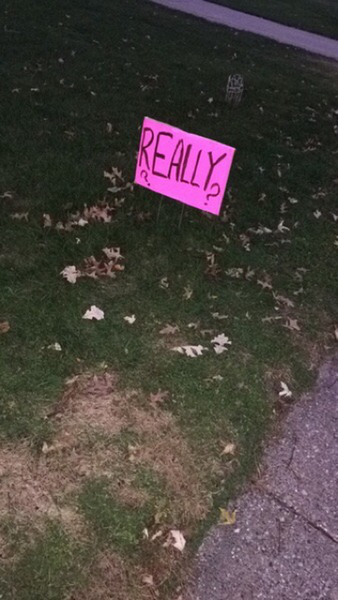 What I will ask is, does the majority of America understand who they voted for?

Throughout this whole election, I’ve never been biased. I was never a hardcore Hillary Clinton supporter and I never said I wanted Donald Trump to win. But when it came down to the very last day, I realized how insane I was to even consider this man to be fit for the presidency.

Clinton had been investigated by the FBI for reportedly sending and deleting emails on a private server. The case was that the emails held secret information regarding our country and that Clinton was emailing them out to our enemy. This case scared me. Why would I want a criminal as the leader of the country? After the investigation had been closed twice because the FBI found no evidence, I started to really consider Clinton.

Clinton is a Yale graduate who has been preparing for the presidency her whole life– law school, first lady and secretary of state. She knows Washington D.C. inside and out.

Yet, the position went to Donald J. Trump.

Donald Trump is a businessman and former reality TV star. Notice how crazy that sounds compared to first lady and secretary of state?

Now, I would give Trump a chance if he could just control his temper, his mouth and respect others–respect minorities, respect Democrats, and respect women. As a latina woman living in a Republican state (Iowa), I fear what Trump will do.

Trump can’t do anything major unless he has the house’s approval. We know that, but the idea of having a president that uses slang like, “bimbo,” is horrific to think about.

The lack of gracious professionalism that Trump brings to the table is unreal.

“Can you imagine that, the face of our next president? I mean, she’s a woman, and I’m not supposed to say bad things, but really, folks, come on. Are we serious?” Trump said about Carly Fiorina, his opponent at the time.

“When these people [Asians] walk into the room, they don’t say, ‘Oh hello, how’s the weather? It’s so beautiful outside. How are the Yankees doing? They’re doing wonderful, that’s great,’ They say, ‘We want deal!'” he said in what’s considered the stereotypical ‘Asian’ voice.

And let’s not forget the time he insulted us Iowans.

“@mygreenhippo #BenCarson is now leading in the #polls in #Iowa. Too much #Monsanto in the #corn creates issues in the brain? #Trump #GOP,” reads a Tweet that was retweeted by Trump on his Twitter page.

My point being is that this man is the perfect businessman, but what on Earth makes you all think he is qualified to be president? Just because he’s a Republican? Just because you can’t stand Hillary Clinton?

His financial skills will take him a long way in the White House, but only for so long.

Congratulations, Donald Trump. You have until Jan. 20, 2017 to get your act cleaned up. Learn to respect others and become the president your voters believe you’ll be. You have the basic skills, you have the votes and you have won. Now get it together before this country falls apart.