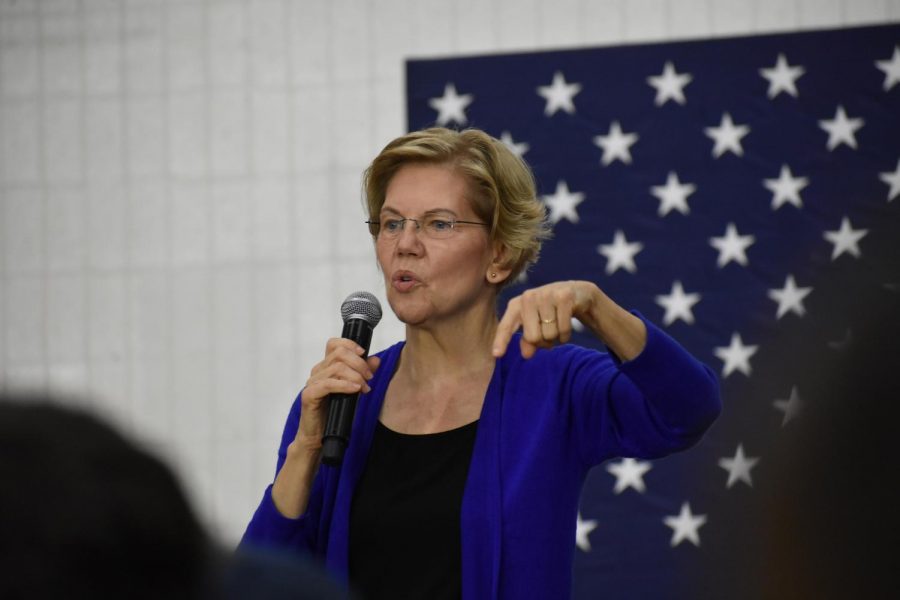 Warren talks to the crowd. She addressed the crowd using hand motions to add emphasis and get them more involved as she spoke

In the gym of Davenport North High School Sunday, Nov. 3 Presidential Candidate Elizabeth Warren held a town hall meeting to talk to her Quad City supporters. She talked mostly of her plans for change when she becomes president, such as; removing college debt and providing free college education, and fixing ties with our allies.

One person spoke out on their views on choosing a candidate.

“I have not decided on one specific candidate, but I like her policies,” Bettendorf High School senior Mitch Winterlin said.

Winterlin plans to vote for the first time in this election. With paying close attention to candidates climate change platforms.

Her policies including her views on corruption in our government and how she wants to change people in power to use morals. Another person shared their views on her.

“I feel like her background in education and politics is vital,” Bettendorf High School math teacher Kaitlyn Mahoney said.
“We need balance in the system and that means we need more power in the workers,” Warren said.
During her presentation, Warren spoke about three things, bringing down corruption, giving power to the middle class, and strengthening democracy. She gives explanations during her time talking about these points.

“We need balance in the system and that means we need more power in the workers,” Warren said.

Warren brushed over her anti-corruption plan during her talk on corruption in the government.

Another part of her plan was to tax the top two percent, two cents for every dollar over $50 million.

Later she ties all of her points together.

“I want three things: attack corruption head on, make some structural change in this economy, and protect our democracy,” Warren said.

To finish off her presentation, she addressed her campaign and the people who came to watch her.