Gala gets a fresh new look 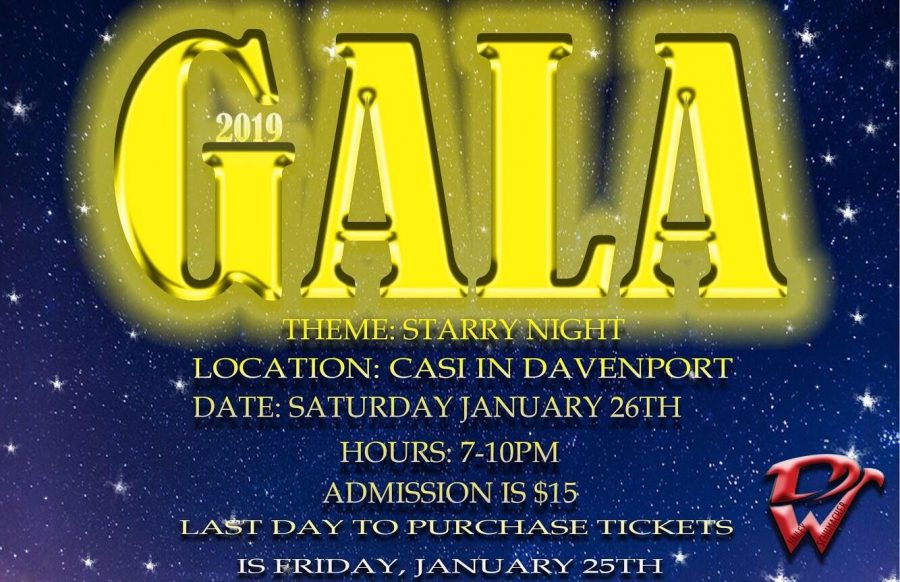 Published with permission from Chad Wolf

Gala has been re-scheduled for Saturday, Feb. 9 from 7 p.m.- 10 p.m. at CASI.  The theme is Starry Night. Tickets are $15 and and can be purchased before or after school and during lunch in the activities office.

Students attending this year’s Gala dance should expect to see significant changes. Gala is one of many names for a mid-year dance many schools have where girls ask the guys to attend. For many years, the music department has used Gala as a fundraiser for their program.

Last year was the last time the music department was the head of the dance. This year it has been taken over by fine arts teacher Chad Wolf and the entire art department as a fundraiser for their program. They hope to raise money for opportunities for students in their courses.

“As an art department, we are constantly looking for funds for different projects and experiences for our students, so we thought that this would be an easy fundraiser. We found out it’s not as easy as it looks,” Wolf said. “The music department did an amazing job at running it and making it look like there wasn’t much to do.”

Wolf was a chaperone for the dance last year and spoke with the music department letting them know that the art department was interested in taking it over.

Many challenges arose when planning the dance and it didn’t seem to be as easy as it looked.

“It was a learning experience and we didn’t know how Gala escorts were chosen or anything like that,” Wolf said. “We also had trouble with security at the dance and didn’t realize they had to be paid.”

Wolf and a great deal of other teachers in the building are all working together to put on a fun dance this year. Fine arts teacher Mark Sade worked closely with Wolf in planning and executing the dance.

“ We were surprised at the amount of things that need to be done.  I am impressed how the music department ran the dance in years past,” Sade said.  “Some of the money goes back to the art department so in those regards it is a big deal.  As far as next year, lets just say I want to get through this year.”

The theme of starry night was ultimately decided and approved by Principal Cory. Williams. Wolf’s computer graphics class held a contest to design the tickets. Sophomore Hailey Schumacher’s design for the tickets was the one chosen.

“When I found out mine was chosen, I was very excited. I really loved Mr. Wolfs class and I am very interested in design so it is cool that my design is being used,” Schumacher said.

It is undecided as of now if the art department will continue to run the dance another year, but taking it on this year has taught them many lessons and gave them ideas for what they would like to accomplish if they were to do it again.

“I tried to get together a gala committee of students to get them involved but it never really took off. That is one thing I’d like to change for next year is to get students more involved in decision making and give them a bigger voice in the dance.” Wolf said.

Wolf tried this year to get together a Gala committee to help students get more involved and voice how they want the dance to be so that it goes over better with other students.

“I’d really like to get the students involved because this is their dance.I’d rather have them tell me what they want the theme to be and such.” Wolf said. If students are making these decisions then they have a better understanding of what other kids want.”