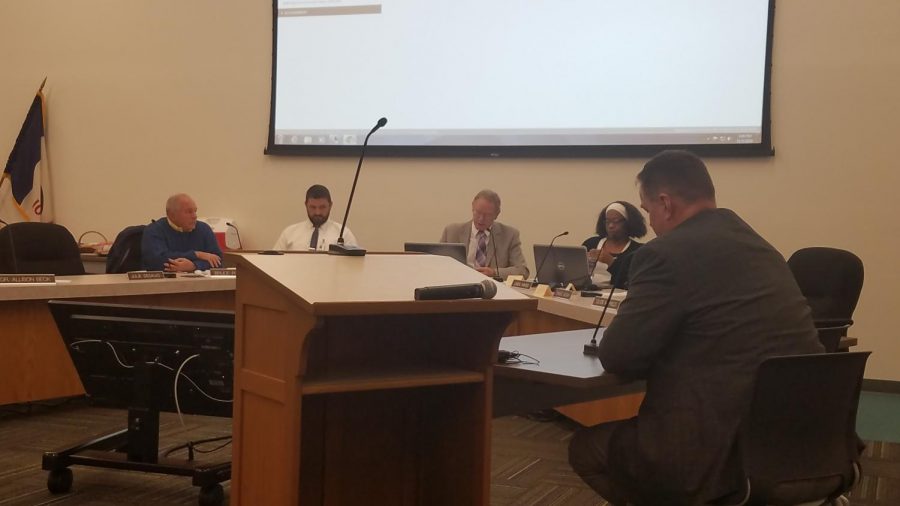 The school board gathered for nearly two hours discussing the current state of the district.

An emergency board meeting was called at J.B. Young on Wednesday, Oct. 31 after the swearing in of interim Superintendent TJ Schneckloth the night before. The meeting discussed various topics, notably the new superintendent’s contract and how pension programs would be handled. Later on Monday, Nov. 5 another board meeting was held in order to discuss the school’s relationship with the Area Education Association, the five year budget, and handling special education in the district.

The committee of the whole meeting featured all standing school board members as well as AEA representative Bill Decker, who announced some future plans for the AEA’s involvement in the district with staff entering Monroe and Buchanan Elementary, as well as a pilot project at Williams Intermediate.

Throughout the school year the AEA plans to continue cooperating and providing resources to the district, particularly with regards to the way special education is treated.

Members of the board and the AEA have noted its unsuccessfulness, and both sides are working to fix it and find a new road.

“We expect to be the biggest resource the district will let us play,” Decker said.

A general sense of optimism and looking towards the future was displayed by everyone speaking.

“Let’s envision the way the district will be in the future,” Board President Ralph Johanson said.

Johanson spoke about the AEA and the role they play in the district, referring to them as invaluable.

Superintendent Schneckloth noted throughout the discussion that the budget was fluid and was very much subject to change as the school year progresses. Some points of contention included costs going to outsourcing, and staff cuts according to projected student losses in the October enrollment schedule.

In the newly proposed budget, 14 changes were made to the October budget, of which six were considered significant by Chief Financial Officer Claudia Woods.

Vice President Linda Hayes noted that a decision must be made soon as the clock is ticking.

“We need to work with this and come up with something,” Hayes said.

A vote was later called and the budget was passed 5-2. This was passed after discussions of both special education once more, as well as cultural issues in the district.

The special education discussion was short, but the conversation was summed up by Johanson.

“I’m confident that everyone is doing the best they know,” Johanson said. “But maybe we need to think just a bit differently.”

Hayes then spoke of disproportion in the school district citing the high rate of suspensions and expulsions African Americans receive in the district. She also spoke of the lack of minority students in AP and honors courses.

Cultural focus groups will be held in an attempt to help staff understand the backgrounds of students.

“I have been in some of the best districts around,” board member Clyde Mayfield said. “We’re doing better than some, but I expect us to do even better.”