17 years after the tragedy, West's welding students restore the memorial to honor those fallen. 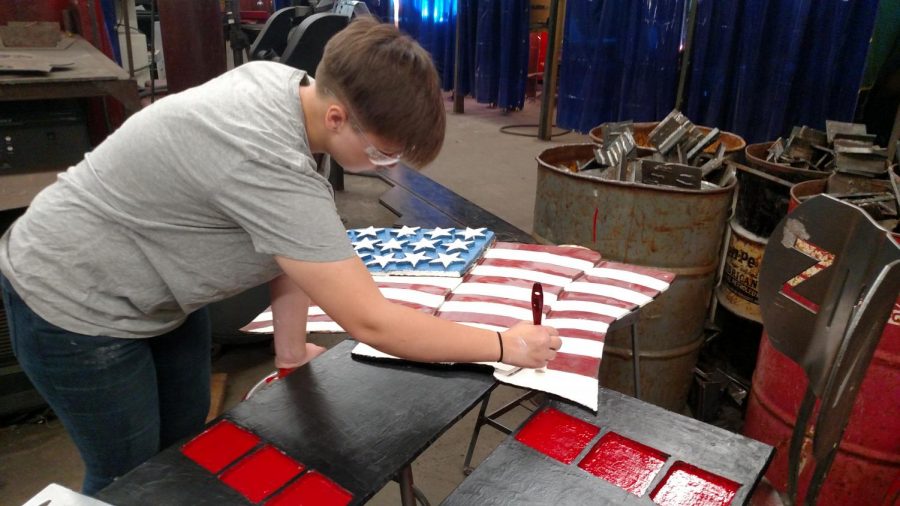 On Sept. 11, Mr. Zinn’s Vocational Welding class began their project to refurbish the 9/11 memorial located in the front of the school.

“We built the memorial 17 years ago in my class and refurbished it once about five or six years ago. I was driving by it and thought it was time to make it look nice and pretty again,” Zinn said.

Zinn began the project by showing videos about 9/11 and talking about how that day changed so many American lives. He thought this was important because almost all of the students in his class were not born when 9/11 occurred.

“My favorite part was seeing it come back together. It was very beat up when we first got it, and now it is really nice and colorful again. It has a lot more personality,” junior Madison White said. “Sept. 11 was a day that changed America. We don’t often take time out of our day to learn about it anymore. We took a whole day to learn about to and talk about it. I think people should be reminded that it happened more often.”

According to junior Samuel Buckley, the whole class participated in bringing the memorial into the welding room. Students then put together a schedule to get the project done in seven days. They then put together seven maintenance teams, and each team was responsible for a certain job.

“We rolled it into the welding room and used our grinders and wire wheels to get off the old paint to get it to a steel finish again. Once that was all done we got the paint brushes out and divided them up so every kid had a paintbrush on that sculpture. Back when we built it,we had a lot of kids helping out so it was kind of the same concept,” Zinn said.

West graduate, Patrick Boyle had the original idea to build the memorial 19 years ago in Zinn’s Vocational Welding class. It was his final project. The rest of the class had to help him with moving parts because it was so heavy. The last time Zinn got a letter from Boyle, he was a pastor in South Korea.

“It was difficult to actually be built. We poured the concrete, used the foundering to make metal casting, all the steal work that went into it originally made it a pretty significant project. Now getting it into the welding room was probably the hardest part because it is stinking heavy. Finishing it is not that hard, it just needs to be done,” Zinn said.

Zinn enjoys the process of refurbishing this memorial because it brings him back to many memories. Zinn still remembers the students who were in his class the day the Twin Towers went down. Also, he believes it would be disrespectful to not keep the memorial un to date.

“We were right here in the shop when it happened. I can still remember the kid who told me when it happened. Ryan Bohnert was the student who heard it on the radio and he is now a livestock farmer on a farm in Illinois,” Zinn said warmly. “We thought it was just a little plane that crashed into it [the first tower]. My stomach was just turning thinking about those people stuck in the building above the flames where the planes hit. And my stomach still turns to this day thinking about what choices they had to make from up there.”

Zinn’s class is hoping to be done renovating the memorial on Friday, Sept. 21. They plan to take it back out to the front of the school Friday morning.

“I kind of view it as almost disrespectful to just let it sit there and rust and look terrible even though it was built as a memorial. You don’t go around seeing memorials that are junky and dirty and spray painted on. They look really nice as a way to remember those people that perished on that day,” Zinn said.