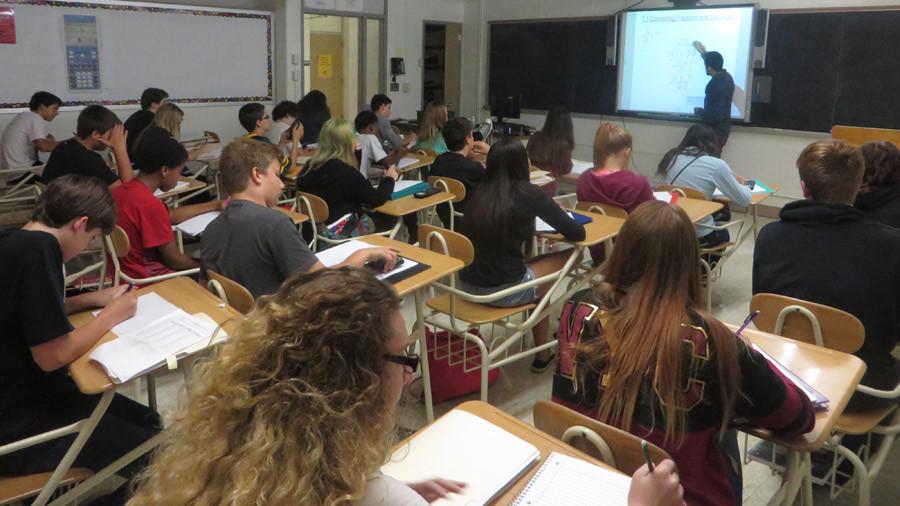 Students listen to Jared Perez explain a lesson in Algebraic Principles class during Block 4 on Aug. 26.

“Interesting,” is the way Kaitlyn Reinier explained her first day of freshman year. After getting lost multiple times and having locker troubles, Reinier was surprised when the students and staff were more helpful than she had expected. She also figured out a few things about West early. “I learned my lesson,” she explains, “never go down the main hall. It’s way too crowded.”

The first day of high school is just as important of a day to freshman as it is to seniors, for more similar reasons than most would expect. Sometimes the start of senior year can be uncomfortable, with the fear of college in mind and the ideas of this being the last year.

“I’m not nervous anymore,” says Kiegan Carstens, “because I’m finally a senior.” As a freshman, Carstens was scared on his first day of school. Four years later, and that nervous kid who got lost on his first day ceases to exist.

The students aren’t the only people with first day jitters. New teachers can find it nerve-wracking, too.

“I’m a little awkward, but so are freshman, so it kinda works out.” says science teacher Smith. As a first year teacher in a big school, Smith didn’t know what to expect. He ended up having a great first day and left West feeling tired from all the fun. “I love being in a big school,” he explained. “I grew up in a small town, so all the people is a great change.”

For most students, the first day wasn’t as bad as they expected. In fact, it was exciting to reconnect with friends after a long summer.