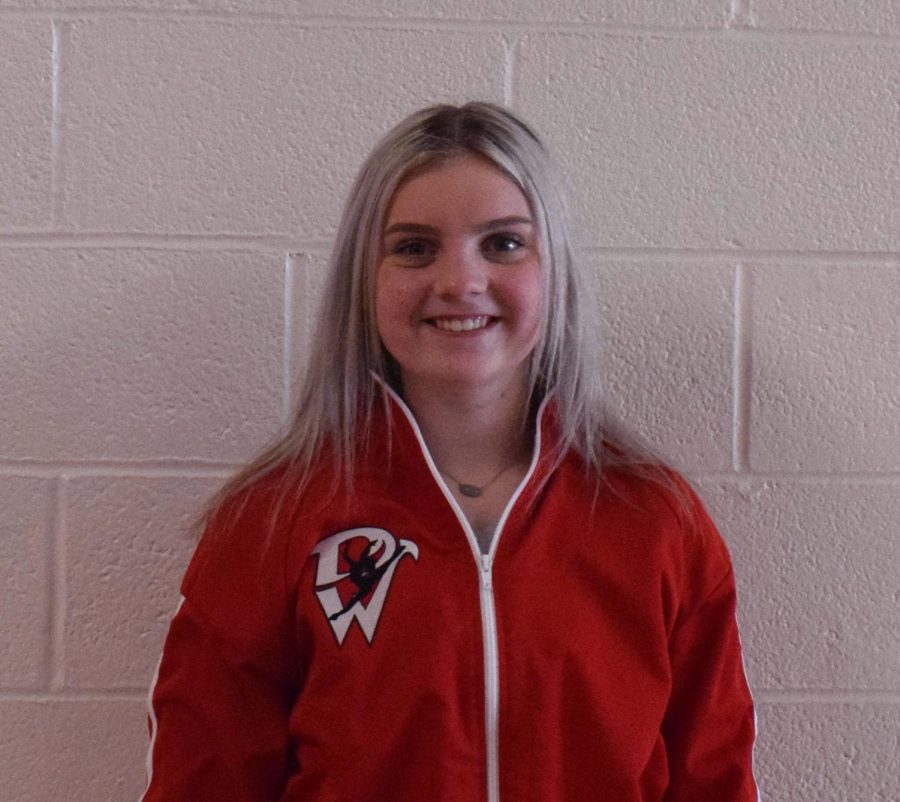 Peyton Flynn smiling during second block. She is a great role model for those around her and she is in lots of clubs/sports at West. “I really like high school and just West in general. I feel like there's a lot of positivity rolling around through like school activities and sports. I just feel like it's a really good place to get involved,” junior Peyton Flynn said.

Chorale, show choir, jazz band, concert band, drum line, dance team, cheer team, and golf. Just to name a few of the many things Peyton Flynn takes part in during her time as a West High Falcon. She is also busy with her academic success and her part time job. All while positively influencing those around her and encouraging others to get involved at West.

She also takes some honors and AP classes. She is determined to get the most out of her time at West. Flynn attends lots of school events to perform with her sports/clubs.

Mrs. Engles has Flynn in choir. Flynn has had her as a teacher for three years.

Like many others she knows Flynn will achieve her goals.

“This girl is going to be very successful. She’s just so helpful no matter who you are, what you’re doing, she’s always willing to go the extra mile for really anybody who asks,” Engles said.

Flynn has a passion for percussion. She has been in band since 5th grade and that’s how she met one of her closest friends.

“Band was always one of our favorite times together because we loved being able to play percussion while still getting to talk and mess around. Peyton is such a bright light and I am so grateful that I’m as close with her as I am,” junior Sarah Bernick said.

Even though Flynn is loving her time with her friends here at West, she has plans for after she graduates.

“I want to go to college, continue doing percussion and hopefully like drumline. Maybe go into education,” Flynn said.

After school Flynn spends some of her time at her job. She has been working at Whitey’s for almost two years.

“I work at Whiteys ice cream. I usually work like 4 to 5 nights a week. We just make ice cream and clean,” Flynn said.

Flynn has a system to keep up with her productive day. She has a very busy schedule, but keeps up with it very well.

“I have like a strict agenda in my calendar where I plan everything out top to bottom. I just use my calendar and color code things,” Flynn said.

Flynn has made a lot of fun memories at West, but her favorite memory is the Homecoming bonfire.

“My favorite memory is probably the bonfire like the homecoming bonfire is always a super fun night. You do the parade then come back and it’s so fun because the dance team performs, cheer performs, drumline does all that good stuff. It’s a really fun experience,” Flynn said

She has had a positive high school experience so far and a big part of that is because of how involved she is at West.

“I really like high school and just West in general. I feel like there’s a lot of positivity rolling around through like school activities and sports. I just feel like it’s a really good place to get involved,” Flynn said.