Band and orchestra in high school

How does band or orchestra life affect the high school experience? 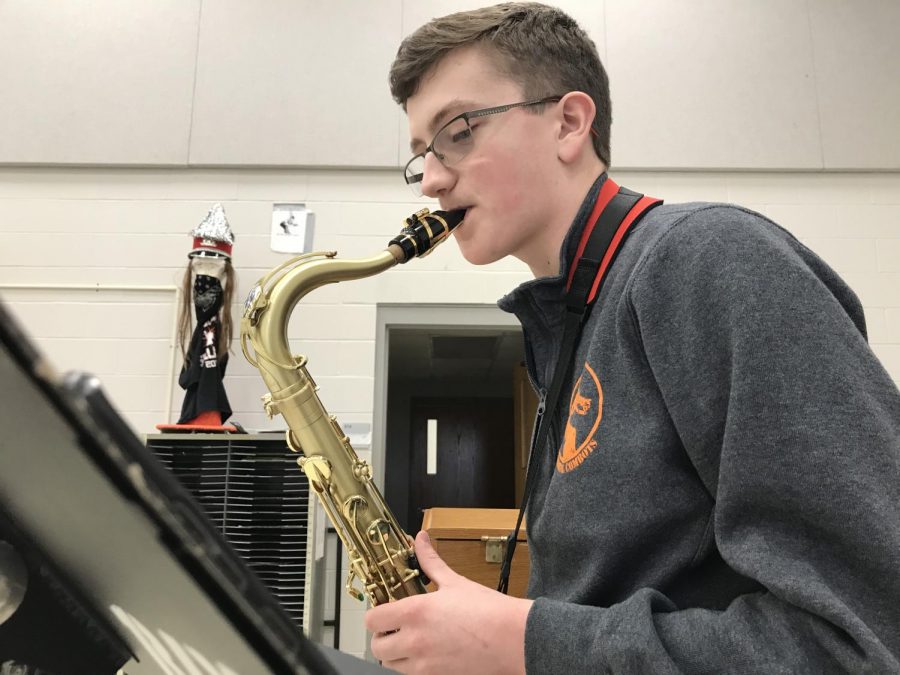 Senior William Zogg plays the saxophone, practiced hands flying across the keys of the instrument with style.

Close your eyes and imagine it: your finger plucks the string of your instrument for the final time before the applause begins, or you breathe in after blowing the last note for marching band, and the stands are erupting with cheer. Excitement and relief flood your veins, your skin tingling as your finished performance shows all the work you sank into your instrument with jaws of dedication. Every hour you spent endlessly playing your instrument or studying sheet music is finally paid off.

Many students in the United States start having a knack or an interest for musical arts from a young age. Some may sing, some may dance, but others might be proficient with plucking strings or tapping notes. Depending on their choice, these students may end up in band or orchestra starting in middle school and continuing through their grade school career.

“When I was five I started playing piano, and from [fifth grade to now] I’ve just been playing percussion,” freshman Peyton Flynn said.

Not every high schooler stays home to play video games or read books. Flynn has sacrificed hundreds of hours practicing in the past, and upholds that regiment to this day.

While five hours across seven days can be split up any number of ways, it always results in time being spent practicing, rather than socializing. Every high school offers numerous opportunities for students, and that will often times result in sacrificing one opportunity for another.

Being a freshman involved in music, Flynn as a long road ahead of her until graduation. For senior Morgan Schaeffer, graduation seems right around the corner, and she reflects on her music history.

“I am the first chair of the viola section. I like to think I’m a leader of sorts, but it’s not official,” Schaeffer said.

Viola is an instrument similar to the violin, the difference being that the viola is larger and deeper toned than its counterpart. Being the first chair means that Schaeffer will be the one to play solos for the viola section of the orchestra. Earning this position takes work, it’s not just handed out to anyone.

“I’ve spent eight years on the viola, and I had a couple years where I played piano. I played piano when I was about seven to ten. It wasn’t something I was passionate about, but it got me into orchestra,” Schaeffer said.

Despite all the time and dedication put into the craft, Schaeffer doesn’t intend to continue playing the viola or the piano after high school.

“It’s a fun high school thing. My dad always encouraged me to do stuff, and I don’t exactly like sports,” Schaeffer said. “Orchestra is a lot of effort, you have to put a lot into it and in college I believe you have to put more into it, but I’ll have to be focusing more on work and school.”
While college doesn’t involve music for Morgan Schaeffer, a freshman violinist has opposite plans.

“I feel like I could get a scholarship for it,” freshman Emma Peters said.

Upstart Emma Peters is the first violin for the violin section of the orchestra, which is considered to be an impressive feat for a freshman.

“I started with the violin,” Peters said. “I’ve been playing instruments since the fourth grade.”

Some instrumentalists go the extra mile before and during high school, in order to get an extra edge on sharpening their musical prowess. Orchestra, being a block of the school day, can interfere with in and out of school events, depending on the individual student’s schedule.

“I used to take private lessons every Thursday, but other than that it doesn’t affect much,” Peters said.

The private lessons aren’t the end of orchestra’s conflictions for Peters, as her school schedule was also affected by the class.

“I wanted to do yearbook, but I couldn’t because Orchestra filled my schedule,” Peters said.

Scheduling conflicts appear in numerous forms, depending on the student, but one thing all band and orchestra students face universally are lessons held during the school day.

“Orchestra has a whole block now, the only time I miss anything is occasionally about ten minutes out of a class you that you pick,” junior violinist Ruben Lugo said.

Lugo is comfortable with the way orchestra works out for scheduling, as he’s never had a club or class interfered with because of it.

“With concerts, they give you notice way in advance, so as long as there’s no delays, everything’s okay,” Lugo said.

Notice is given in advance to band students when they have a performance scheduled, similar to how orchestra students are notified before a concert. This doesn’t necessarily mean all students find the scheduling convenient.

“In the fall, when it’s marching band season, it can get annoying. You can’t do anything before school because of early bird marching band, and a lot of Fridays are taken up because of football games and whatnot. Other than that they’re pretty nice about scheduling it around sports and anything you want to do,” senior Lillian Thurber said.

Band’s performances don’t stop when the football season ends, given the winter concerts and all the band variations that exist.

“There’s a lot of performances, especially if you’re in jazz band or show choir pit, because you travel so much. It’s kind of impossible to have a job sometimes when the band schedule’s getting busy, especially if you take the extra bands,” Thurber said.

If dedicating hours each week to practicing an instrument sounds tasking enough to make for a busy life, consider junior Michael Hill, who is in both West’s band and orchestra programs.

“I’m thinking about going into music education, seeing as how it impacted my life so much,” Hill said.

Hill is in both orchestra and band at West, taking on a tasking and time consuming role in the musical world.

“In general, I’ve been playing instruments since the fourth grade,” Hill said. “I play percussion in band and bass in orchestra.”

“Collectively, on both instruments, I’d say I spend six to seven hours [practicing in a week],” Hill said.

Given the amount of work put into both programs, life is bound to be different both in and out of school for Hill.

“I feel like I’ve made way more friends and connections than I possibly could have without it.” said Hill.