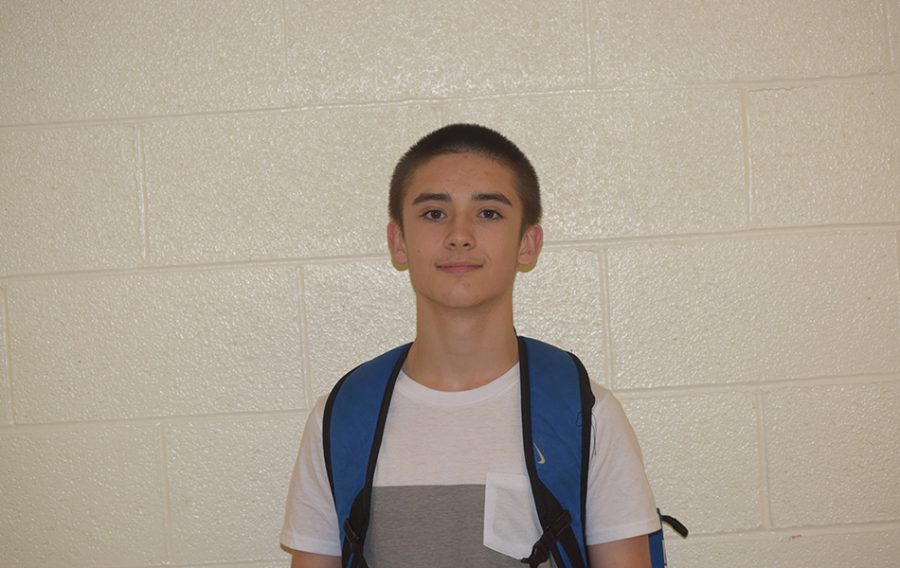 A food you would eat off the ground? Strawberries.

What is your biggest fear? Sharks. They’re scary and they eat people.

The story behind the human

“That’s one small step for man, one giant leap for mankind,” American astronaut Neil Armstrong once said, but if this happened in 2016, he would have been shocked to discover that he was not the first to land on the moon. That feat would go to sophomore Brandon Davis who chose to leave his mark on the moon in the form of a short message: “Ball is life.”

Just like the message emphasizes, the simple things in life are what is important to Davis. “Ball is life” is his favorite phrase which is exactly why he would write it on the moon.

“I love basketball. Michael Jordan [is my biggest influence] because he’s the best player to ever play basketball,” Davis said. If you want to be the best, you have to learn from the best apparently.

And when Davis does eventually make it to the top (even farther than the moon), he can celebrate all of his success with his friends like he is reliving the best day of his life.

“[For] my eighth birthday, I had a hotel party and me and all my friends went swimming,” Davis reminisced.

Among basketball, Davis’ friends are another thing he finds important, and he shows his gratitude by helping them out when they’re in need.

“We were hungry and we were going to Steak ‘n Shake and he [a friend] didn’t have any money, so I bought him food,” Davis recollected.

“Learning how to ride a bike [is my favorite childhood memory],” Davis said.

A bicycle is one of the earliest ways for young people to get around and it’s clear that Davis cherishes that freedom as well with the classic movie, The Goonies, most resembling his life, according to him, because he loves to go on adventures.

A song that accurately describes Davis’ life is Love Yourz by J.Cole, a seemingly popular pick that aligns with freshman Carter Bell’s choice.

“There’s no such thing as a life better than yours,” the chorus sings, and Davis’ guilty pleasure is symbolic of that. “I like to take baths and light candles,” he reveals.

Pure and straightforward, Davis lives his life one day at a time, taking nothing for granted.