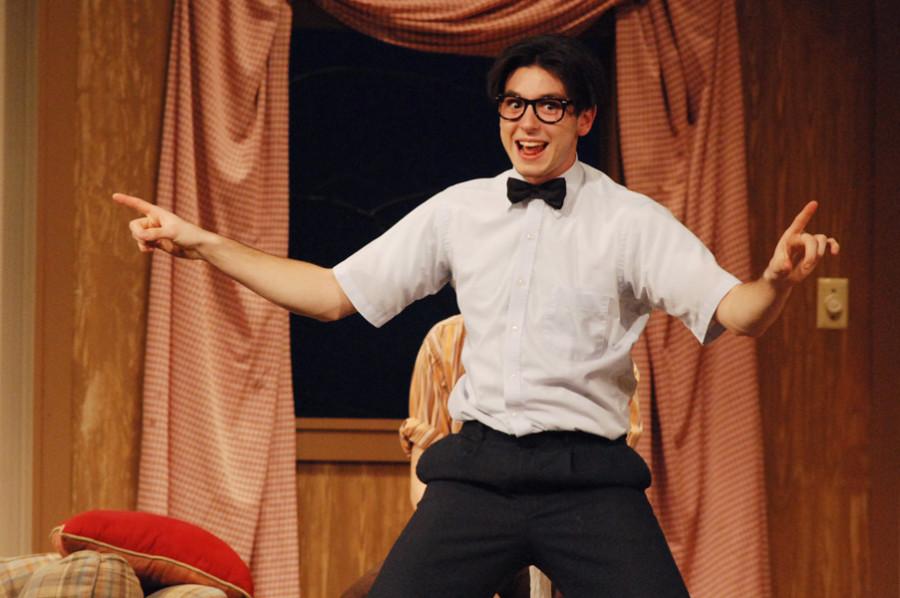 Tanner Mecham portrays the Nerd on Nov. 7 in the auditorium.

Falcon Theater presented a delightfully energetic rendition of the comedy “The Nerd” on Nov. 7.  Larry Shue’s script provides a range of humor, from snappy one-liners to slapstick antics, all centering around how to get an annoying Army buddy to leave his friend’s home.

The cast of seven obviously had fun playing their characters, making them all the more amusing. Tanner Mecham made the Nerd both annoying and charming with his absurd comments and playful grin.  From his unabashed singing and banging on a tambourine to the dead-pan seriousness of his strange requests, Mecham kept the audience riveted on him throughout the play.

Danny Whiskeyman made Willum’s frustration with the Nerd seem unbearable, and his character really comes to life when he aims a T-square at the Nerd and pretends to shoot him. Ryan Hayes captured Axel’s scheming, cynical personality with his mature stature and smug finesse.

Sophie Crago was delightful at being caught in the middle of the fray, giving an amusing sense of bewilderment to her character Tansy. She often mirrored how the audience felt about the Nerd.

John Dubberke played the outraged businessman trying to keep a semblance of order while indulging in the Nerd’s idea of fun.  In once scene he is walking barefoot in his suit with a paper bag over his head complaining that he can’t see. In another scene he enters the house with cottage cheese dripping from his hair after it was tossed out the window moments earlier.

Madison White’s expressions while trying to hold back her outbursts of anxiety before needing to break a plate were spot-on hilarious.  Michael Trettin played the spoiled kid who hides in fear of the adults’ bizarre behavior. He, too, provided many laughs, especially when he faints and is drug into a closet by a panicked Willum.

The living room set was detailed and spacious, allowing characters room to interact in a realistic setting around a comfy couch.

Upgrades to the auditorium’s lighting system lit the stage brightly without the shadow areas seen in the past.  The sound system made everyone’s voice easy to hear.

Those who attended enjoyed a two-hour treat. There is nothing like connecting to characters on a live stage.  Both actors and audience must engage their imagination to create a believable story. This creates an intimate relationship with the actors on stage, something that you don’t feel while watching a movie. It’s worth the effort to see a live performance and enjoy what the actors and crew have worked so hard to produce.

This was director Kristin Koski’s first production at West. “The Nerd” was a great way to start, and we look forward to her next production of “Guys and Dolls” on April 8-10.